The safer we are, the less engagement we get. That's what we've found when it comes to our blogs and content.

In 2017, you can find plenty of examples of this dynamic all around you. The abundance of click-baiting and fake news is probably the best. They elicit emotions and cause us to take action.

If you haven't heard the term "clickbait," it refers to a title that begs you to click the link for an article. For example, a link might have the title, "You'll be amazed by number 7." When you click through, however, 7 really isn't that important. It's sort of like being Rick Rolled.

I explored this a bit in another blog post I wrote titled, “Is Facebook Making us Stupid and Lazy?” (Of course, I think the answer is yes. You’ll have to take a gander later and let me know what you think.)

Fake News and the Election

Don’t worry, I’m not going to talk politics here (or not too much, at least). I won't accuse you of hating the sage grouse or some other nonsense if you voted for a particular candidate. Instead, I want to point out some interesting trends we saw with the 2016 Presidential election.

While I don’t think the problem's nearly as bad as many pundits suggest, I do think that fake news (particularly from Facebook) swayed the election significantly. In the last couple of months, news outlets, talking heads and idiots alike have been lamenting fake news.

The graph below is data from the marketing analytics firm Jumpshot. (I’ve just copied their graph wholesale. Pretend I came up with it myself. It'll make me feel better.)

Anyway, what amazes me is how many people still share fake stories based on outlandish claims like "Obama banning the Pledge of Allegiance in schools**" or “The Trump Effect.”

**The story of Obama banning the Pledge of Allegiance was posted on www.abcnews.com.co, which as since been taken down** 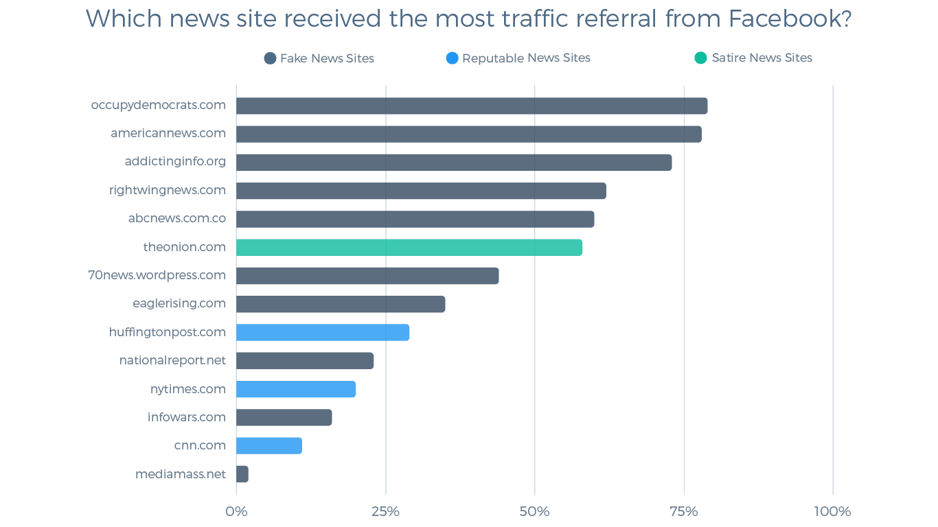 Fake news has driven people to action. It has created significant engagement and even swayed opinions. Talk about a case study in cognitive dissonance, huh?

Why Talk About Fake News?

As painful as it may be to sort fact from fiction and assess the damage of all this, it does have a point. Fake news and click-baiting have one thing in common: They're sensational and geared to provoke a rise in emotion.

Emotion drives action. The more excited we become, the more we'll want to do something. If we get angry, we'll want to prove everyone wrong. If we agree wholeheartedly with someone, we’ll defend that person—often to a fault.

Someone told me years ago that sales is simply a transfer of enthusiasm (s/o to Matt Lopez). The more enthusiastic we are, the harder we’ll try to get someone else to agree with our point of view. You can harness this enthusiasm and move people to action.

Marketers Need to Learn to Stop Being Safe

Click-baiting is a cheap shot. Fake news is just plain irresponsible. So, let's look at what marketers can learn from these tactics and how they can put this knowledge to work.

One good example for us is our blog post, “How to Avoid ‘Trumping’ your Web Presence.” We intended this title to play off the now President-Elect without really saying anything about him. While the engagement on that post was limited, you’d be shocked at some of the emails received on it. And we didn’t even make any commentary on the election. The title alone caused emotion.

Even effective, super-uplifting content isn't safe. It makes a bold statement. It takes a stand. So don't think you have to be controversial in order to not be safe. If it clearly provokes emotion, then you're doing it right.

I should make a cautionary statement, though. If you're going to take a risk and not be safe, you need to accept that some people won’t like you for it. Make sure that you'll produce the right kind of emotion.

It helps to remember that you can’t be everything to everyone. Don’t be afraid to be yourself. You may offend some, but you’ll excite others.

Don’t be rude or dogmatic, but take a little risk. If you go too far, take a step back and try again. Make life awesome.