I can't believe that in 2015 this is a post that has to be written.

Not too long ago, I was sitting in a meeting of a local non-profit organization talking about their website. I was brought in as an outside consultant. Their web developer was in the room at the same time.

Now, I use the term web developer loosely. They are really a video group that programs in Flash. They develop websites in Flash along with presentations and other things that they do.

At one point during the conversation I realized how threatened they were by my presence when I asked about their mobile strategy.

“You mean about the Flash, right?” was the terse questioning.

I didn’t confirm or deny that was what I was talking about (it wasn’t) but the owner of the web company proceeded to tell me all the things they were doing so that their video would still play on an Apple mobile device (iPad and iPhone).

What I actually heard was, “We’re going to be doing twice as much work so that most of the mobile traffic can still see it in a way that can be considered mediocre.”

I am sure that I’m going to make a number of Flash developers upset as they read this post. I know there are those out there that really think Flash is the way to go for building websites. I recognize that sometimes an incredibly rich Web environment or a game might require it but there should be a clear strategic reason to use Flash on a website.

Reason 1: Flash Sucks Because of Apple

The most immediately obvious reason why you should never use Flash is that the iPhone and iPad users cannot see the Flash. The late Steve Jobs didn’t like Flash so he wouldn’t include it in his operating system.

Those companies that sell Android devices claim that this is one reason why you should buy an Android device. Even with the fact that Android can display Flash, that is not a valid reason you should switch — and this doesn’t matter for your website visitors because you won’t convince them to switch.

Apple iOS represents approximately 50% of all mobile traffic. That’s what you should worry about.

Oh, Adobe is stopping development of Flash Player for Mobile Devices, anyway... as of three years ago.

Reason 2: Flash Sucks Because of SEO

Those who use Flash often do so because they want to have a richer user experience… that makes sense. They’ll include fancy fonts and displays of the text in ways that traditional HTML can’t. Incidentally, if they’d just learn HTML5, this wouldn’t be an issue.

In fact, at the link to Adobe above, Adobe has said, “…HTML5 is now universally supported on major mobile devices, in some cases exclusively. This makes HTML5 the best solution for creating and deploying content in the browser across mobile platforms.” (See the tie-back already to the first reason?)

The issue is that all that text in there is essentially invisible to the search engines. You can load all sorts of great content but the search engines won’t know what to do with it. You’ll create the prettiest site in the world but no one will ever see you unless you spend more money to specifically drive traffic.

Yesterday, I reinstalled my operating system — I got an upgrade. I hadn’t installed Flash yet so when I went to a Flash website, I was greeted with a missing plug-in message. It said “install”, so I tried it.

Here’s the process I went through. (click to see image in a new window bigger) 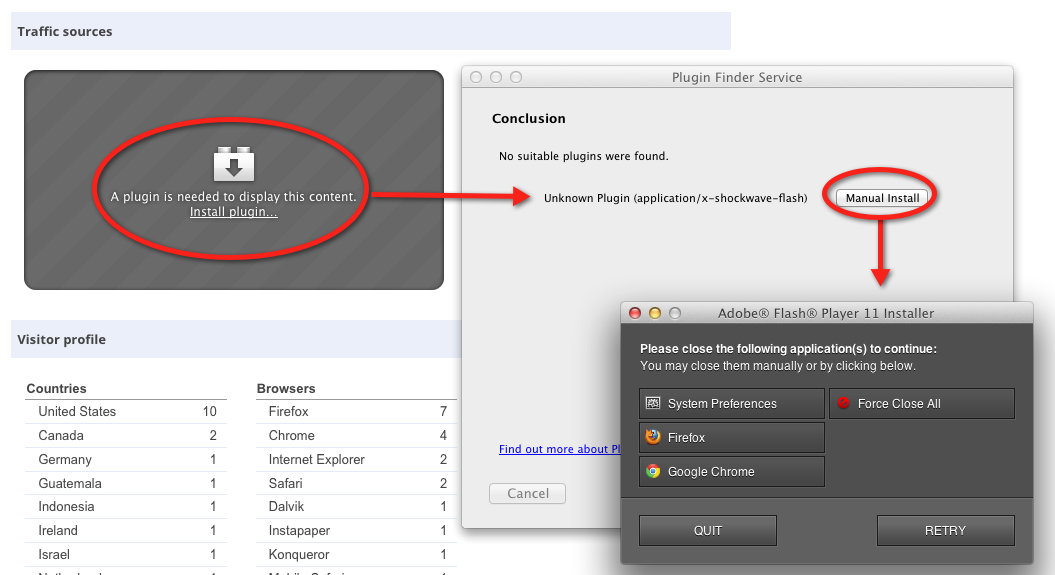 So, after I closed everything out and installed the Flash plug-in, I then needed to go back to my Web browser and find the page I was on again. Sure, I recognize that now that I have this done, I won’t have to worry about it until I have to upgrade the Flash player but how must more difficult is this going to be for someone who doesn’t have the knowledge about my operating system that I have. 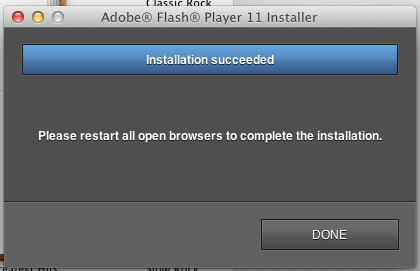 I guess it forget that the previous screen said that I wasn’t allowed to continue without already closing them.

But, the reality is that Flash won't go away until developers stop convincing clients it's a good idea.

see all
Back to Top